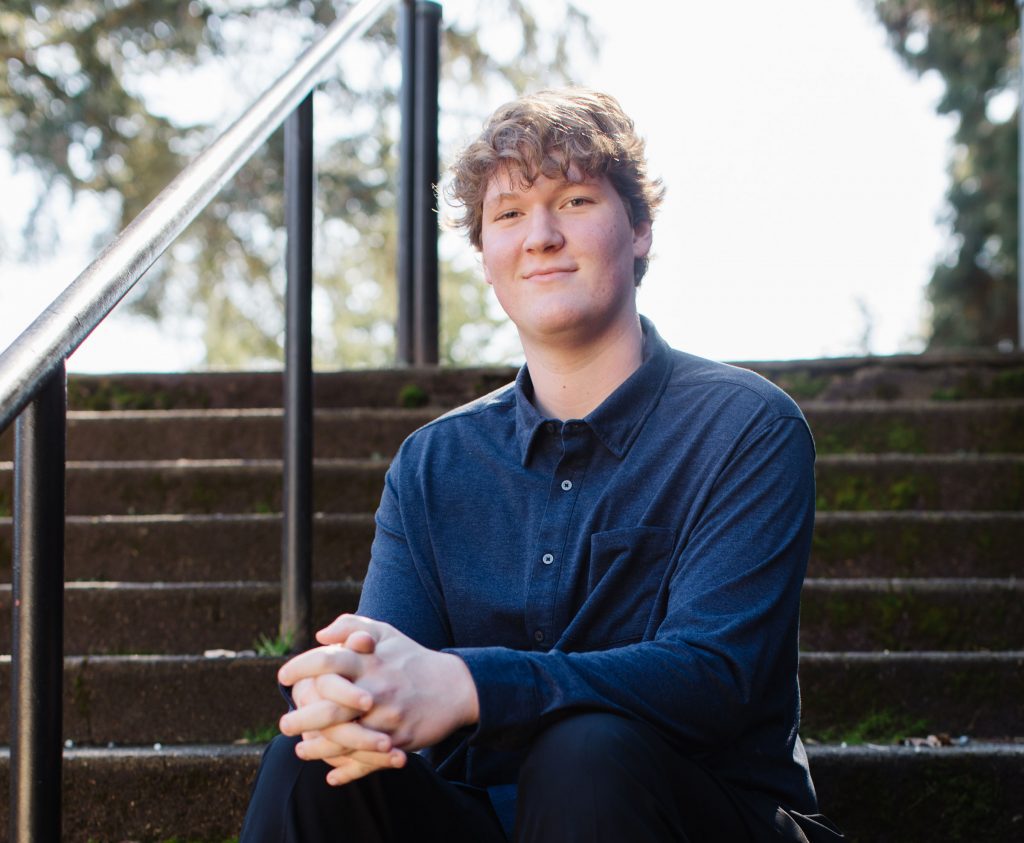 Jeremy Douglass was homeschooled, attended Springfield Classical Christian School, then Covenant High School, like his older brother. Since then, “I would say the greatest thing that’s changed for me is my perception and understanding of others,” Jeremy said. In addition to maturing in empathy and awareness, he has fostered a healthy perspective of perfectionism.

As a freshman, Jeremy’s goal was to be Valedictorian, or at least Salutatorian, like his older brother. Many younger siblings can relate in that it can be difficult to follow the footsteps of an older sibling. Jeremy said he quickly realized that achieving a 4.0 GPA would be a challenge. He is transparent about how frustrating it was that despite his hard work and sacrifice, he might not achieve that specific goal he set out to accomplish. But Jeremy is also humble as he acknowledges how he is overcoming the challenge of idolizing perfectionism in his work. At Covenant, Jeremy said he learned how to overcome personal challenges such as these.

For Jeremy, there are three teachers in particular that have left a positive impact: Mr. Hannula, Mr. Friedman, and Mrs. McMillan. “All of them showed great passion and true understanding of the topics they taught and were always willing to offer help, whether it was review, help with studying for a test, or giving us generous retakes,” Jeremy said. Mr. Hannula, who teaches history, impressed Jeremy with complete knowledge of his curriculum. Despite history not being Jeremy’s best subject, he grew to respect Mr. Hannula and even share in his enjoyment of history. Jeremy said he was fortunate to have Mr. Friedman as his math teacher during his two most difficult math years. Not only was Mr. Friedman able to teach formulas and concepts but also explained the logic behind them concisely and simply. Finally, Mrs. McMillan, Covenant’s choir director was according to Jeremy, “always encouraging her choir members to be the best musicians they could possibly be,” Jeremy said. “She never dismissed students’ ideas, and she used a few arrangements that I created in our concerts, helping me refine them and improve my knowledge of techniques required for composing.”

In addition to these teachers, Jeremy is grateful for specific Covenant offerings as well, including AP classes, Spanish, and choir. Because of Covenant’s AP offerings and concurrent credit, Jeremy is able to reduce a five-year dual major to four years, saving him money while allowing him to pursue a dual major at college with no extra time spent past a normal 4-year degree. Spanish ignited a passion for foreign languages and even supplemented his understanding of Latin. Jeremy said this is the class he will probably use the most in his future. Choir remains as one of the classes that shaped him the most. “The love of music it created in me helped me choose where to continue my schooling after I graduate, with one college’s Music Department tipping the scales,” Jeremy said. “It gave me an incentive to take voice lessons, an experience that helped me to better myself musically, and that enabled me to help others who were less experienced.”

Jeremy has much to be proud of over the past four years. Some that stick out to him are awards received for his scores on the National Latin Exam, choir solos he was chosen for, and two speeches he gave in the speech meet his junior year. This was especially important to him, as speech was once one of his hardest classes. In addition to these accomplishments, Jeremy was named a Commended Student in the 2022 National Merit Scholarship Program in 2022. About 34,000 Commended Students throughout the nation are recognized for their exceptional academic promise. Jeremy placed among the top 50,000 students who entered the 2022 competition by taking the 2020 Preliminary SAT/National Merit Scholarship Qualifying Test (PSAT/MNSQT).

Outside of the classroom, Jeremy has served his student body as an Ambassador, in Honor Society, the Student Store, and participated in the Math Team. His hobbies include piano, computers, video games, technology, cooking, reading, and math, all when he’s not working at a pizza store called Pizza Time. Jeremy has attended Pilgrim Bible Church in Steilacoom for his entire life and served as the senior sound engineer for the past few years.

After Covenant, Jeremy plans to attend The Master’s University in Santa Clarita, California, and study Computer Science with an emphasis in AI and Music Production. He hopes to design a video game of his own one day or work for a company in need of an AI specialist.

We are excited for Jeremy and to see all that God has in store for him after high school!